Skip to content
Some of Charley's thoughts.
Who's that?

You can get an email whenever I post something new.

A few nights ago, as I was tidying the kitchen, a loud buzzing noise arose behind me. As I turned to look, something flew right at me. Struct by a sudden fear, I ducked and backed away. Eyes scanning, I quickly spotted it: a large dragonfly had come to rest on the table.

Dragonflies are totally harmless – I had nothing to fear. Yet my body responded as if everything were on the line: my adrenaline had flared, eyes dilated, heart rate quickened, etc. Although my body meant well, this was hardly my ideal pre-bedtime state. This “survival” instinct, I thought, was doing more harm than good.

The next morning, I had another bug encounter. Opening my front door revealed a juicy 2-inch beetle, right at shoulder level. Yet again, my body flared up, and, yet again, that momentary fear quickly turned to annoyance.

It’s worth noting that I’m no insectophobe. I’m generally the person “dealing” with bugs when others get squeamish. (Clearly, I still have some work to do.) It got me thinking, though – what’s at the root of this fear? I don’t have a traumatic history with insects; bugs have never done me any harm. Further, I know that I’m the apex predator, not them. I’m 1000x their size and can literally crush them. So why can bugs still elicit such an intense threat response? Will I ever just “get over” them?

Well, turns out my cognitive brain doesn’t really have a say in the matter:

Fear-relevant information reaches the amygdala prior to any second-hand information from the visual cortex, and a fear response is initiated prior to conscious recognition of the threat. This entails a fast reaction and a better chance of an individual’s survival, even though the amygdala might have got it wrong. (Baynes-Rock, 2017)

Said another way, my body responds to “fear-relevant information” before my cognitive mind can do anything about it. Makes sense: better safe than sorry. But that begs the question – without active cognition, how does my subconscious know what is “fear-relevant”? Does it have its own catalog of “scary things”? And where does that catalog come from? Am I born with it, or do I develop it over time? 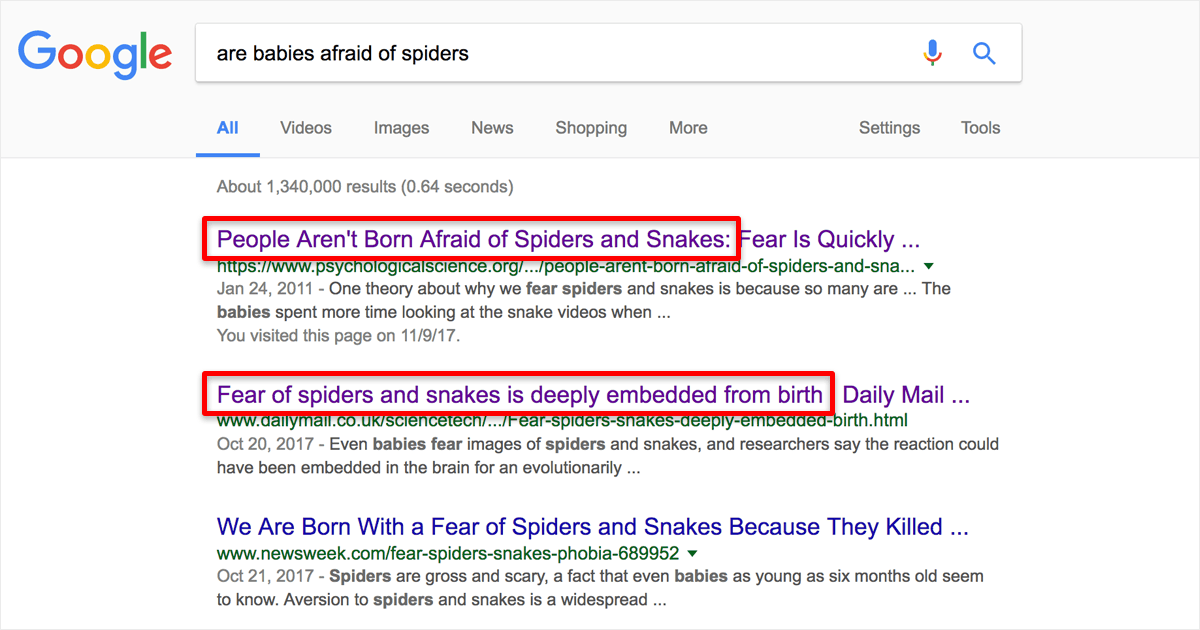 Time to dig into the scientific literature. Vanessa LoBue’s work came up again and again (e.g. 1, 2, 3, 4), but I’m going to pull quotes from Marcus Baynes-Rock’s recent review paper: “Human Perceptual and Phobic Biases for Snakes: A Review of the Experimental Evidence” (snakes, insects – same difference to me)

It appears that humans are born pre-programmed to detect certain snake-y features:

Fascinating. Snakes are “scary” by default, then. Does that mean I have no chance to overcome my latent fear of insects? “Where humans outwardly react non-fearfully to snakes … it is still likely that they experience a physiological change in line with a pre-conscious fear response.” So I’ll always be afraid bugs?

Tim Klucken’s research helps us answer this question. Summarizing some of his work, one article states: “there is very little physiological difference between fear and excitement.” Further, “if you learn to anticipate fearful situations then you actually activate the nucleus accumbens, which is the reward center of the limbic system. Thus knowing you’re about to be scared is actually somewhat enjoyable.”

With sufficient preparation, then, our “pre-conscious response” to seeing spiders and snakes can transition from evoking fear to causing excitement. And that makes total sense – just think of all the other “scary” things that we learn to think of as “fun”: bungee jumping, horror movies, bitter foods, etc.